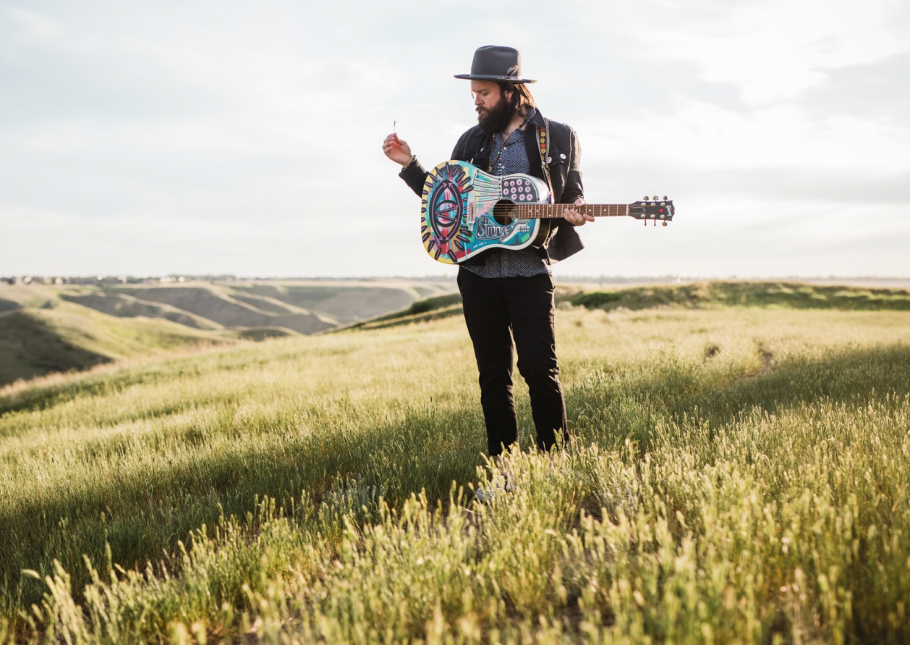 Tickets are on sale now, get yours here: bit.ly/2ZosLJq

It’s said the cells in your body replace themselves every decade or so. After 11 albums, two EPs and 17 years as a singer-songwriter, Leeroy Stagger has been wondering if maybe the soul works the same way. Ten years sober, with two kids, a home in Lethbridge and a world class recording studio to go with it, he’s far removed from the hard-living twenty-something who started on this musical path. As far as Stagger can see, they aren’t even the same person.

Strange Path is the name of Stagger’s newest album and book, a name that applies as much to his unexpected route from the BC punk scene to southern-Alberta singer songwriter as it does to the album’s own evolution. Following from 2017’s Love Versus, itself a creative re-emergence after a years-long fog of anxiety and depression, Strange Path is the end result of a triple-album’s worth of scrapped demos, record label rejections, and a spirit-reviving retreat inwards. It’s also Stagger’s most ambitious and philosophical creation yet, a veritable self-help book pulled from a lifetime of struggling towards the light and brimming with the hard-won joy at the heart of his recent renaissance.

From the appropriately haunted “Leonard Cohen is Dead” and the cosmic reflections of album-closer “The Light” to the hard-edged stomp of “Jesus and Buddha” and glam-rock bliss of “Strange Attractor,” it’s an album of sharp hooks and sharper insights, a statement on loss, forgiveness, pain, faith, The Clash, Gord Downie, love, death, fear, letting go, higher powers, Mother Earth, obsession, redemption, and the path we all walk through life.

Exploring all that terrain takes one monster of a band. To piece it together, Stagger surrounded himself with some of the best players in the business. The first step was enlisting “Love Versus” drummer Pete Thomas (Elvis Costello and the Attractions, Elliot Smith, Los Lobos) to once again lend his meticulous musicianship to the mix. If anyone could navigate the heady themes Stagger was charting, it’s the man Tom Waits once called the best rock drummer in the world. Longtime collaborator Tyson Maiko stepped in on bass, with Paul Rigby (Neko Case, Garth Hudson, Jakob Dylan) joining on guitar, and Stagger’s touring band, the Rebeltone Sound (Ryland Moranz on guitar, mandolin and vocals, and Michael Ayotte on piano, synthesizers and keyboards) rounding out the arrangements.

Production duties were trickier to pin down. Brad Barr of acclaimed act The Barr Brothers shared the helm on four of the eleven tracks. That left Stagger, a veteran producer of other artist’s albums, to steer his own ship for the first time. Self-producing took a more methodical and patient approach than the shoot-from-the-hip style Stagger usually preferred. Then it was turned over for mixing by 5 time Grammy winner Ryan Freeland (Ray Lamontagne, Bonnie Raitt, Aimee Mann, Rodney Crowell and more).
It turned out to be a blessing, though, another insight gained on the long road to Strange Path.

Of course, there’s no path so long without a fork or two along the way, and one of the roads-not-travelled on the way to the album turned out too tempting to abandon. Released on May 17th, Me and the Mountain is a companion piece to Strange Path, an Americana-influenced counterpart to Strange Path’s contemporary sound. Featuring guitar wizard Steve Dawson (Zubot and Dawson), and award-winning multi-instrumentalist Steve Marriner alongside Stagger and Rigby as well as Barr, the album shows yet another facet of Leeroy Stagger’s ongoing musical reflections.

Following up a career-redefining album like Love Versus is no small task. Strange Path and Me and the Mountain prove Stagger is more than up to the challenge. Bristling with love, grit, and confidence, they show the singer, songwriter, producer and performer at his best. He’s stared down his past, retraced his steps, reflected on the beauty and pain of a life that’s had more than its share of both. Maybe he’s not the same person he was 10 years ago, but if anything, Leeroy Stagger is more himself than ever.

Strange Path the book will be out at the same time as the album. It is described as an artists’ path through trauma, healing and music and finding self purpose through the art that this work entails.